I loved Wonder Boy 3 the first time I played it and I still love it. Some time after completing it, I got Wonder Boy in Monster Land and I was somewhat disappointed - it couldn't live up to its sequel. But... when I got to the end and realised that the two games directly lead into one another, I realised what a touch of genius that was, a crossover rarely seen since. That's not to say it's not a great game, just a little old-fashioned.

The hardest part of the game is its final stage, a castle maze where taking the wrong turn will almost always take you far back in the maze. It's deeply infuriating but after a while, I had commited the route to memory :) Sadly, it's fallen out somewhere over the last 10 years or so, I had a hard time getting to the end this time, even with savestates :(

Note that due to its nature, the final level map is HUGE. I've marked on all the loop-backs, which took ages. It also overlaps itself in a few places - you have to follow the green arrows, all the others are loop-backs to various degrees (the redder the more severe).

Read the story in the game. This game rocks!

Labyrinth of No End 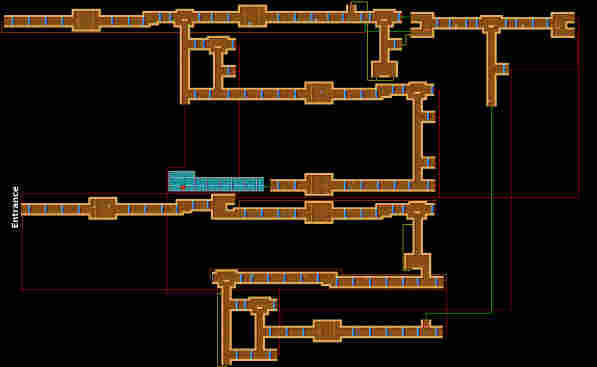