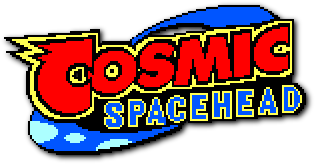 One of the late Codemasters games released on the Master System in 1993, Cosmic Spacehead is the only point-and-click adventure game released on the system. It is in fact a conversion of Codemasters' game "Linus Spacehead", released for the NES using their expander device to avoid paying Nintendo's extortionate licencing fees. It seems they were all set to release unlicenced games for the SMS, having developed the hardware and figured out the system without an SDK, but Sega licenced the games and everyone was happy.

Anyway, I thought it was cool when I got it and I really like the game - it has some nice attention to detail and some impressive graphical feats. Unfortunately, most of them were because the original NES version had to deal with the system's limitations, so we get 3-colour sprites in the conversion which is kind of horrible. The use of patterns to give smoother gradient effects even with a relatively small number of tiles is very clever - note that Secret Tunnel only has 4 colours, for example.

Cosmic Spacehead is an interplanetary tourist, and discovered the mythical planet Earth. However, he forgot to take any photos and nobody believes him. Lead him on a quest to get back to Earth and prove his story!

The Wilderness ➡ The Cool Pool