This is the first game I ever mapped - I even got it published in the last ever edition of Sega Master Force, the short-lived UK Sega 8-bit magazine which went bust (I think my maps weren't a cause).

Of course, they took my paper map with annotations and guide and took a load of screengrabs and left off most of the information I, as a slightly obsessive child, had recorded such as which switch triggers which door, etc. If I feel the inclination, I might add the annotations to these maps, but actually I think you should enjoy playing the game instead - to show you everything would devalue it.

However, now I have the ability to take screengrabs, and also to hack the game - so I turned off the clock, hid the status display, unmasked the leftmost column, and occasionally poked RAM so I could get to unaccessible areas. There are about 10 or 20 screens in the game which are impossible to get to! There are also a lot of bugs :( but overall, it is still one of the best games on the system (in my opinion) and much better than the Mega Drive version which was released several years later.

You are the prince of Persia (now Iran) but unfortunately your Evil Grand Vizier is... evil. He's kidnapped your girlfried, and set a 1 hour timer after which she will die; and you're in the depths of the castle dungeons. You'd better get going to rescue her.

Run around the place, press floor switches which all either open or close doors. Kill enemies after you find a sword, find the exit door switch and move on. And watch out for the Vizier's magic... 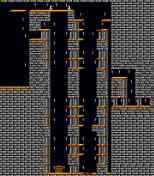