So I’m writing some code that needs to cache things in a map. The key in the map corresponds to a unique sender. I want my senders to be able to get guaranteed-unique IDs without any server, peer-to-peer or static config; what they have is a string and an int that in combination, is guaranteed unique.

But I think that’s going to suck as a map key. Strings need memory accesses and lots of them. Ints can live in a register and compare in a single cycle.

I tried really hard to come up with a way of making them both merge into an int, without any luck. Mr. Boss Man suggested I should try actually measuring the difference between different types as map keys.

Here’s the core of the test code I wrote:

I then ran it with five different key types:

Here’s the results in Excel-o-vision, for varying map sizes and averaged across 10,000,000 lookups: 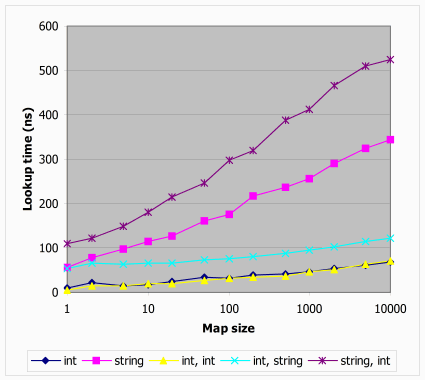 They’re roughly linear in log(n) as you might expect. Here they are as relative slowness compared to int: 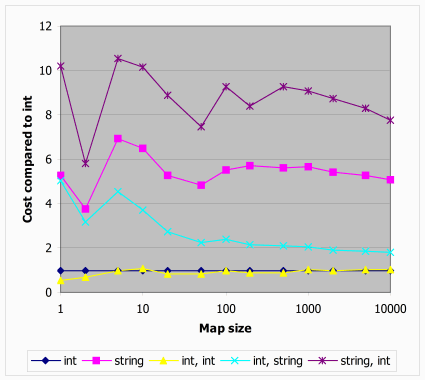 So, for small maps (as I’m expecting in my case):

Update: These tests will of course have benefited hugely from the CPU caches. In real life, that doesn’t always happen. So I added some code to nuke the CPU cache (just a large memcpy() and being careful to exclude it from the timings) and got these: 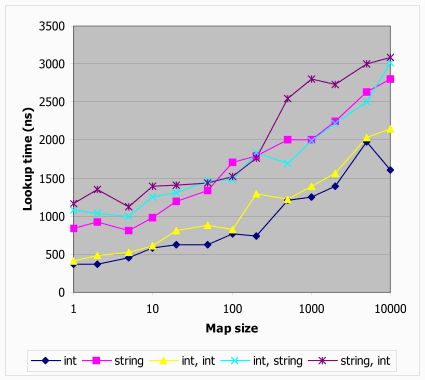 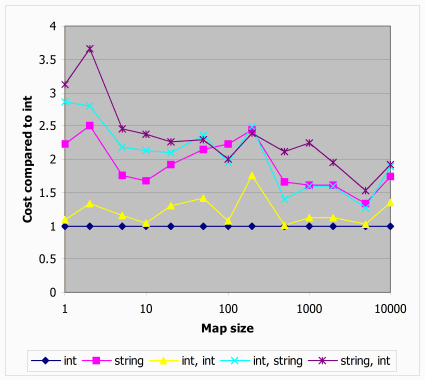 A bit uglier, obviously a lot slower... the “cost” is less extreme, but it still produces similar conclusions, I think. Lookup is going to be on the microsecond level with strings and half with ints.